[generic] What are we running and playing?

#161
We've just started a Primetime Adventures game based in a mid-field Formula 1 team: Box! Box! Box! I had intended the first session to be around "The car's really fast, but you've just found out it's because it breaks the rules. What do you do?" Then one of the players decided to play the unscrupulous team boss, to the conflict is "The car's really fast, and breaks the rules, how to you keep it quiet?"

Staff member
#162
Astronocky said:
Well I am enjoying it too, thanks for running it!
Click to expand...
Yes, I am enjoying learning a game whilst not having read the relevant chapters!

Steady march continues; Gumshoe has a growing presence with the Yellow King and Trail of Cthulhu, but the heavyweight remains D&D5e with Curse of Strahd. May will start with Alien tonight (hopefully) then some more one-shots at North Star...

#164
April was an OK month, would have met my target (10 sessions) if not for a last minute cancellation on Friday 30th. I'm still looking for another long term game for the weekends, but that will probably have to wait until June now (with North Star and a visit down south to the in-laws). North Star in May will hopefully boost me up to my cumulative target.

Feng Shui 2: Playing through Burning Dragon (the first of the Altas Games Feng Shui 2 subscription adventures). It's OK, but has a few rough edges and could possibly have done with a few more play-tests. The issues aren't very visible from the player side, but our GM is suffering a bit.

The Great American Witch: Running two games of this on an alternating weekly basis, and I'm really enjoying it. It's a bit different to standard PbtA games, and it's occasionally quite hard work to keep up with the twists and turns that the insane super-powers of the witches can deliver.

Game 1 is Wall Street Crash, where the coven has encountered a mysterious and extremely powerful box of souls locked in a vault under a Manhattan office building. Due to some poor dice rolls, the coven's first attempt to break into the vault ended up opening a stable portal between the mundane world and somewhere else. Quickly stitching this portal shut, their next attempt accidentally dragged the vault and box into a pocket dimension, whereupon one of the witches manifested a burning sword and proceeded to smash the box with it. Cue the explosive destruction of the pocket dimension, and the creation of a massive burning rift thought all the planes of existence. After rapidly putting the fire out and patching the rift up (let's hope no-one notices), the coven returned to their bar, where the coffee machine is still broken. They are starting to suspect it's been cursed. Next is to investigate the terminally-ill women suing one witch for $25 million, who due to being magically blessed shouldn't be able to get ill...

Game 2 is Fear and Loathing, and this coven are starting on a road trip from Las Vegas to New Orleans. Having robbed the Illuminati in Vegas of a lot of money and a powerful magic item wrapped up in dark spells, the coven had stopped off to remove the offending bindings. While doing this they released a massive pulse of magical power and also sent a wave of curses at the witches who created the bindings, who are the Seven, the ruling council of American witchcraft! The baby witch messed up the cursing and instead revealed herself to the Seven, which is only a little worrying. The exhausted coven stopped off in Flagstaff for a rest, which resulted in: one set of parents who seem to have had their memories erased, a friendly "extended family" (aka a vampire colony) having to be ritually destroyed as result of the coven's actions, the discovery that someone is killing off members of their old coven in Vegas, and a lot of ravens dead at the hands of the Wild Hunt. Next stop the Hopi reservation to ruin the lives of more family members.

First was a quick game of Lasers and Feelings, which we kind-of got the hang of and didn't butcher too badly. No alien civilisations were harmed in the making of this game.

Next was Be My Bodyguard, a strange little game that tries to emulate the Whitney Houston/Kevin Costner film, but really needs a lot more work. The conclusion of the group was that we could see there is a game in there, but we reckon pretty much every bit of the rules needs at least tweaking if not completely re-writing to make this a good game. As it is, we enjoyed ourselves while fighting against the system, which is not the fun I'm looking for. 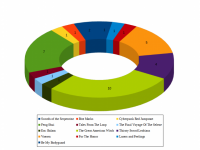 Staff member
#165
Played my second ever game of Dragon Warriors last night. I think two dice were rolled. I want to use the system in anger, but on the other hand the setting is already comfortable British and 1980s based on pre Raphaelites, William Morris and BBC and ITV dramas.

Staff member
#166
F20 focused so far. Foundry has arrived as a VTT and I will expect it to grow this year. Role will continue to be important to me and I will see Roll20 as I play other GMs' games. #167
How are people using Foundry? One of my big concerns about it is the hosting side, recalling how terrible self-hosting could be with MapTool.

Do folks just use a server, and if so which one? How much does that cost?

#168
I've looked at Foundry but the hosting issues have put me off so I've stuck with MapTool. Apart from a couple of players who drop out on a regular basis (they live together and I think their issues are related to their broadband connection) it's been very stable.

Staff member
#169
MartinP said:
How are people using Foundry? One of my big concerns about it is the hosting side, recalling how terrible self-hosting could be with MapTool.

Do folks just use a server, and if so which one? How much does that cost?
Click to expand...
I host using the Forge. About £4 a month? Will check that.

#170
Thin on the ground, it shows that despite my anxiety with physical events, they're key to getting me gaming.

In 2020, I played about two games and ran a few (notably sessions to promote The Dee Sanction).

This year, I've run nothing and actually played a bunch. Trail of Cthulhu runs in 2-hour weekly sessions; specifically, we're playing through The Armitage Files. Vaesen was a two-shot introductory session with Jason Durall kindly playing host. Trophy Gold was a one-shot, but we have a sequel planned in a couple of weeks time to see if we settle better into the notional structure of this stripped-down game of grim adventure.

For me, this feels depressingly weak and the anxiety of both creating online games and inveigling myself into them is everything to do with the low session count. Without Trail, I wouldn't have even mustered the effort to make a pie chart!

#171
Guvnor said:
Played my second ever game of Dragon Warriors last night. I think two dice were rolled. I want to use the system in anger, but on the other hand the setting is already comfortable British and 1980s based on pre Raphaelites, William Morris and BBC and ITV dramas.
Click to expand...
Reading through the bundIe collection of DW books I bought a while back it occurred to me there's a real undercurrent of what's come to be known these days as "Folk Horror". I'd guess some of that comes the TV dramas you mention e.g Robin of Sherwood(?)

#172
I'm not going to do the analysis month-by-month to save space. April was a pretty quiet month, with only ten games. That might seem a lot but there was a load cancelled for very good reasons.

One of the highlights has been the start of a new Liminal campaign, working through some of the material for my new supplement, Ley Line of Duty - a focus on P Division and supernatural law enforcement. The premise is that due to budget constraints, P Division has chosen to 'rationalise' its offices in the North and bring them together into one regional office in Leeds.

If you have never used the Crew creation rules for Liminal because 'you don't need that stuff' I would urge you to revisit them. Like everything else in the game they very gently deliver a wagon load of leads and kickers for a campaign.

The other thing I like about running Liminal is that it makes me write actual cases, and that means I will have more stuff to foist upon Paul in the future. The little prelude adventure, about a witch in Whitby, is intensely Liminal and very gentle in it's introduction to the game. We played it 2 on 1 and it worked - it might even work as a 1-on-1 Liminal game.

#173
I'm 9 sessions into the D&D campaign, 'Rime of the Frostmaiden'. I've loved Icewind Dale since reading 'The Crystal Shard', all those many moons ago. This campaign is delivering some cracking action alongside well drawn NPCs who provide great sessions of pure roleplaying. I'm enjoying using the Fifth Edition D&D rules, they're pleasantly light and have helped me recover from the gamer PTSD induced by 3rd edition and its unholy spawn of bastard offspring.

I'll be playing 'Masks of Nyarlathotep' soon, which I'm looking forward to, having run the original on several occasions. The new iteration looks remarkable.

#174
Session 3 of Apps took place, with the PCs still at the hotel in the aftermath of Klaas' funeral... well, mostly.

- Mia almost fell down a lift shaft in the hotel, only being rescued by Robert's strong grip, though he did perhaps hear a faint, whispering voce murmuring "Let go," but he resisted the temptation and pulled Mia back up. Then it turned out that there was perhaps no problem at all, as the lift was suddenly there in it's correct place, as if it had never been anywhere else.

- Elyse and Gregory sorted out their differences in the bathroom, but vacated it fast as the mirror started to crack across, before exploding into a shower of shards; then then walls of the hotel suite started to do likewise! Luckily, Robert came back to the room in time to rescue them both (he's making a habit of rescuing others.)

- There was then an interlude in which Mia finally went grave digging and found that Klaas' body was unnaturally emaciated, as if the process of mummification had begun, and Elyse had some off-camera arguments with both the hotel and the credit card company about the charges to her card.

Back at home in Poland, Mia went to meet her contact Everett Locke, a self-proclaimed medium who could help her interpret the meanings behind the strange shadows & lights on her photographs, but he negotiated a brand new deal with her (after the player rolled very badly for this interaction.) Gregory ends up being guilt-tripped into letting another guest into his house, this time being the older brother of one of the girls who died on the bus, while Robert went out to work, trying to earn his keep in the household, but his plans were rudely interrupted as a car tried to push his bike off the road. He took some smart evasive action, just as his pursuers had planned, driving him up a ramp into the back of a large truck that was waiting to carry him away.