[generic] What are we running and playing?

Staff member
#2
Kennen, my human warrior with no adds didn't do very well in "Red Circle" and then 'died' in "Beyond the wall of tears".. but hey, it's just a dream, right?

Staff member
#3
Deep in an ancient sewer and guided by a hungry ghoulish creature. Nice!

#4
Running - Tribe 8. Fortnightly. Just doing a few introductory scenarios to get the players familiar with the setting before I take them through the Children of Lilith campaign.

About to start running - Werewolf the Apocalypse. Monthly. Experimenting with using nWOD rather than oWOD as the system.

Staff member
#5
@Stronty Girl very keen to hear how Tribe 8 goes.
@First Age and I are fans of old.

#6
Guvnor said:
@Stronty Girl very keen to hear how Tribe 8 goes.
@First Age and I are fans of old.
Click to expand...
I've run Children of Lilith 1.5 times before so I'm sure it will go fine. Though it is my regular Tuesday group playing, so it will probably play out as some sort of cross between Children of Lilith and a Carry On movie!

System-wise, it feels very 90s. Waaaaaay too granular with the skill list, and I've already house-ruled the ranged weapons damage. Because when I playtested combat with my brother and we discovered that you can't kill a cow with a bow and arrow unless it is a very patient cow which stands completely still while you pepper it with arrows.

Staff member
#7
Stronty Girl said:
I've run Children of Lilith 1.5 times before so I'm sure it will go fine. Though it is my regular Tuesday group playing, so it will probably play out as some sort of cross between Children of Lilith and a Carry On movie!

System-wise, it feels very 90s. Waaaaaay too granular with the skill list, and I've already house-ruled the ranged weapons damage. Because when I playtested combat with my brother and we discovered that you can't kill a cow with a bow and arrow unless it is a very patient cow which stands completely still while you pepper it with arrows.
Click to expand...
That's the kind of insight we need!

#8
Running: Night's Black Agents Solo Ops. Got maybe two or three more sessions left in the No Grave For Traitors adventure, after which I think we will give up. We've been struggling with this, largely because I'm not putting enough preparation time in to be able to wing it/patch up the holes on the fly. Of course I could say that if the adventures were written (or perhaps edited) better, i wouldn't have to do so much winging it...

Playing: Black Code. A strange cyberpunk/transhuman/something futuristic game, it has a dice mechanic that seems to be quirky for the sake of quirky (although it's fairly inoffensive, I'm not sure what magic it's bringing to the table). Also, there don't seem to be any hints as to what sort of cyberpunk/etc. game it's actually supposed to be, or any consistency about what you do. Our GM tells us that although there are a lot of pages of setting, they don't really give you much by way of adventure hooks. We've played a couple of small scenarios to get the feel of the system, and just had a belated "session 0" to try and define the game we want to play. We'll see how it goes.

Playing: Bite Marks. Werewolf Powered by the Apocalypse. We are about half way through the short campaign, and things are about to get bloody. Which will be a nice change of pace from the intense emotional drama we have been playing for the last three weeks, although it has been totally and utterly brilliant. I think my character has finally managed to persuade the pack enforcer to stop hitting him with things as a sign of her affections, too.

Played: The Paragon Blade. Playtest of a new fantasy Gumshoe One-2-One game. Took two sessions (Sunday/Monday this week) to do one of the playtest adventures. I don't think this is ready, either the system or the adventure. And I'm also not sure why I would play this instead of Swords of the Serpentine, which I own and has single player adaptation notes already. The setting seems interesting, but not exactly groundbreaking.

Year to date: 90 sessions. Boosted in the last month by two organised play weekends (AlbaCon and Virtual Traveller) and the start of the Bite Marks game. It looks like 100 sessions in the year is actually going to happen, despite my regular Sunday game being on hiatus since the start of lockdown in March. 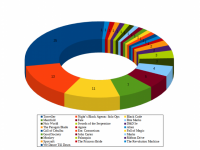 #9
Last Monday ran a game of Mothership via Discord with 4 chaps from Bristol I'd never met before. Despite a certain amount of trepidation on my part about playing with a bunch of complete strangers they turned out to be a good crowd. I used the old White Dwarf CoC adventure The Last Log, discussed at length elsewhere on the forum. I kept the occult/mythos vibe, but made use of the improved handouts and background details Brass Jester developed for the Alien RPG adaptation also discussed elsewhere (thanks Brass Jester).

The PCs got stressed out investigating the horrors of the mining camp and being accosted by the mad gunman Briggs. Despite these travails they managed to kill the big bad, dynamited the alien temple using mining explosives taking out several dozen angry sand dwellers into the bargain, then got the hell out of there on their shuttle and back to the ship. Was good fun with the only down side being the game system. One of my players said he did a spot of gaming design and felt that it was too easy for supposedly proficient characters to fail skill/attribute rolls ("whiffing" is the term I believe). The roll for damage/armour save mechanic caused a fair amount of bemusement as well.

Am thinking of running a sequel but reverting back to Call of Cthulhu rules and using the Cthulhu Rising milieu, or one of Paul Elliot's gritty sci-fi settings. It definitely won't be as easy as the first.

#10
I ran Last Log about 10 years back using John Ossoway's Cthulhu Rising BRP rules. Worked great. In fact 1 did a 12 week campaign with Last Log mixed in with a number of scenarios from the Cthulhu Rising support site. The players had a blast despite the somewhat clunky to modern eyes full fat BRP system.

#11
nclarke said:
The players had a blast despite the somewhat clunky to modern eyes full fat BRP system.
Click to expand...
If I do a sequel I'm going to stick 5th ed CoC rules - the additional BRP detail in the Cthulhu Rising supplement adds an unwelcome degree of complexity to the game, for me at least.

#12
Might be worth trying with John Ossoway's later SciFi rules.

#13
nclarke said:
Might be worth trying with John Ossoway's later SciFi rules.
Click to expand...
I knew he was working on them, are they available now?

Staff member
#14
River of Heaven.. d101 games.
However, it's very future SF and not very gritty horror.
Obviously I would use Traveller with a simple 2d6 San hack, or your preferred CoC.
Alien from Fria Ligan is a very good fit.
But my advice would be, use the rule set you are comfy with that you know delivers the effect you want.

Staff member
#15
We are playtesting a FATE Shogun game by Duncan Rowlands, it's a way to play the Bushido adventures with a light player led rule set, and it's good so far.

My Tuesday afternoon game of Skyraiders of the Floating Realms continues to be a much-needed romp of light-hearted escapism. We are now into Phase 2 of the game, where there are all sorts of rules/guidelines for adventurer's bases, the Skyraiders skyship, and ship-to-ship combat and player character-led boarding actions. Phase 1 was very much about simply adventuring using the stripped-down simple D100 system I'm using, while Phase 2 adds a lot of guidelines/player-led world-building tools. Oh and its still MAXIMUM GAMING FUN YAR!!!

RuneQuest Thursday has now transitioned peacefully to OpenQuest Thursday, with the group actually expanding in size from three to a hearty five players. Session 0 of OQ Thursday went well. I explained the setting, and the players joyously rolled up characters, a mix of old fashioned trad rolling one's stats and allocating skill pts, driven by having a clear character concept. All geared up to start play next week

Staff member
#17
ltd said:
I knew he was working on them, are they available now?
Click to expand...
River of Heaven is available via d101 here: https://d101games.com/product/river-of-heaven-refreshed/ and is really rather good.
However, as-built it's running a significantly higher tech level with transhuman elements than the Cthulhu Rising material.

@Newt refreshed the core book and folded in one of the scenarios not that long ago and it's very nicely done.

I agree with @Guvnor that either Traveller or Alien would handle this set up quite well (although the former lacks a sanity mechanic, and the latter is brutal). It would be an interesting test of the Alien Campaign mode.

That said, if CoC pre-7th works for you, why fix it?

#18
Dom said:
@Newt refreshed the core book and folded in one of the scenarios not that long ago and it's very nicely done.
Click to expand...
Cheers Dom I should really get more out for it, there are things bubbling under the surface for it , so watch out in 2021

#19
I'm about to wrap up my Fate Accelerated High Fantasy scenario that I've been running for the past six sessions. For my next GM block, as we rotate between GMs, I've started prepping a Fate Accelerated Empires Rising game.

#20
As the end of the year approaches, its all change for me.

We've just started an Agon game, that looks like it could be a lot of fun indeed.
The sporadic game of Mage 20 is slowly coming to a conclusion as we wrestle Harvard from the grips of the Technocracy
Our Fate Accelerated Werewolf the Apocalypse game has restarted and is as batshit epic
A one-level per session game of Shadow of the Demon Lord is proving highly entertaining
Fate Shogun is the aforementioned hack of Bushido and started well
Cloudy Brook Academy is a Dresden Files Accelerated hack of academy-based wuxia TV and is a brilliant slow burn