War Stories, a roleplaying game using the Year Zero Engine that is set during the Second World War.

All the background, rules, and scenario ideas needed to run a game centered around the harrowing exploits and extraordinary adventures of the 101st Airborne paratroopers (or alternatively, the British 6th Airborne) will be included. Play as the valiant heroes who parachuted into Normandy during Operation Overlord in June of 1944. The campaign game will allow players to tell the tale of their intrepid soldier-characters (even non airborne such as resistance fighters or tankers) as they collectively liberate France and drive onward toward victory. Above all, players will be able to create moments of valor and courage, ultimately weaving their personal tales into the fabric of history, from D-Day and beyond. These will be their War Stories.

Also to be made available, a deck of 54 cards with weapons, initiative order, the usual for Free League YZE games these days.

#3
Being run at Tabletop Scotland in August, if anyone is going. I dunno if the pre-booking tickets for the game have sold out, but there will be a couple of tickets available at the con, I believe.

#4
I remember the Bren Gun being quite heavy to lug around, and a pain in the proverbial to strip down. Reliving the experience 30+ years later in an RPG doesn't seem very appealing somehow.

#5
MartinP said:
Being run at Tabletop Scotland in August, if anyone is going. I dunno if the pre-booking tickets for the game have sold out, but there will be a couple of tickets available at the con, I believe.
Click to expand...
I've signed up for it at TTS (The Tank adventure)

#6
That's really interesting - I seem to recall having a conversation some time ago about the lack of WW2 RPGs and the conclusion being that it was still 'too soon' an era to be played in (albeit Recon exists...)

As the blurb firmly places the game post D-Day, I wonder whether there will be any guidance for players who want to explore the liberation of the concentration camps? Or how to make the German soldiers more than just moustache-twirling villains/grey uniformed zombies? 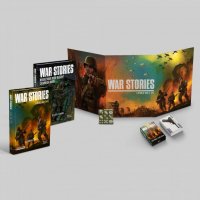