Staff member
#181
Not at all. It’d be lovely to see him one last time.

#182
Absolutely! Just happened to have been watching those final episodes with him and David Tennant this week, pure coincidence, and as always found myself really moved by his performances. By others it might have been too slushy or cringy, but he nailed it every time. What better tribute than another episode.

I'm not a Whovian, just a puzzled bystander.

*White text in case you're avoiding spoilers
Click to expand...
We have a tag for that
this tag is very useful

Staff member
#185
I got up early to watch the final 13th Doctor episode, and I loved it from beginning to end.


It was lovely to see more of the previous Companions and Doctors return, and after all these years Kate L-S delivered the classic "size" line.
The scene that delivered a Boney M number was inspired in it's post modern fun.
The production quality was excellent, truly beautiful with palette consistent CGI and a very well balanced soundtrack.
I have really enjoyed the 13th Doctor, it's been fun and delivered some great stories, wit, fun, pathos and love.
Roll on er 14th?

#186
My brother will have loved that episode as he is of the age where Sylvester McCoy was ‘his’ doctor. I enjoyed it, and am looking forward to that twist playing out over the next three special eps next year.

For me, Tennant is the Tom Baker of nuWho; the best so far

#187
dbm said:
My brother will have loved that episode as he is of the age where Sylvester McCoy was ‘his’ doctor. I enjoyed it, and am looking forward to that twist playing out over the next three special eps next year.

For me, Tennant is the Tom Baker of nuWho; the best so far
Click to expand...
I only had two doctors whom I followed, Tom Baker (re-runs) and David Tenant (live)..

Capaldi was close,but no cigar, though I still have his LEGO set.


I was particularly impressed how the episode paid off the concept of 'Fam' that the Doctor had been pressing about throughout the series. The focus on the companions was much needed. Even the farewell monologue, to the most part, was directed at the plural ('No one else will ever be us' rather than the usual singular ("I don't want to go", "I'll never forget the time I was me" etc)
The not-so-good bit?


Lara and I were both very annoyed at the lack of pay off to the relationship between the Doctor and Yaz. 'Gay Baiting' is something I'm becoming increasingly aware of - I'm looking at you, Thor: Love and Thunder - but I somehow doubt it will be an issue now we have RTD back at the helm 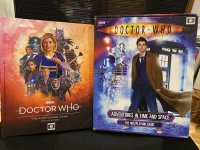 Staff member
#190
I agree with your good bit and not so good bit @Vodkashok. However.. some things don't reach a conclusion.. and the power balance there has always been one to be careful with.

#191
I know that many of you have probably heard the news about the BBC's deal with Disney+ and perhaps have a lot of questions. So I'm going to explain what the deals actually means and put any rumours to bed.

Who owns the rights to Doctor Who?
The BBC still own the rights to Doctor Who and will still be the home for the series in the UK and Ireland. Disney+ has bought the streaming rights for outside the UK and Ireland, under a similar deal that HBO Max once had. However, Disney+ has exclusive rights, which means that channels like BBC America and ABC in Australia have lost their rights to broadcast Doctor Who. Episodes will still premier on BBC One and the iPlayer before Disney+ stream them. It's likely that episodes will drop on Disney+ the same day as the BBC premier but not before.

But didn't Sony invest money in Doctor Who?
This is a popular misconception made by some. Sony bought Sky's stake in Bad Wolf Studios. They don't own the studio outright but they did invest in the studio's infrastructure and equipment. However, none of Sony's money will go into the production of TV programmes and that includes Doctor Who.

Is it true that Doctor Who's budget is increasing because Disney+ are investing in the show?
There are rumours that the series budget is increasing to a whopping £100m. The shows budget for series 12 was around £15m, with BBC America putting in some of the money. However, what Disney+ have paid for the exclusive streaming rights is unknown and may never be made public. It's likely that some of the money generated from the Disney+ deal may make it back into the series, but it's very unlikely that the show's budget will increase to £100m.

When does the Disney+ deal begin?
The Disney+ deal will begin with the three 60th anniversary specials that will be broadcast next November, as well as the 2023 festive special, and Series 14 and 15. That's all the new Doctor Who programming that's been commissioned by the BBC so far. The deal is likely to include any potential spin-offs as well.

Will there be new spin-off series?
At this stage in the proceedings, this question his hard to answer. With the money the BBC is receiving from the Disney+ deal it's likely that some of it will be put back into the production of Doctor Who and other programming. Whether the BBC are going to use that extra money to pay for spin-offs is a possibility, as Russell T Davies has talked about creating an MCU style multiverse for Doctor Who. However, nothing has been confirmed at this stage and rumours of any spin-offs are just pure speculation. Any potential spin-offs from Doctor Who would still be the property of the BBC.

Any further questions, then please leave me a reply and I will try to answer them.
Last edited: Nov 12, 2022

#192
If BBC America no longer has broadcast rights, then their share of the programme funding will disappear. So hopefully Disney+ has coughed up some cash to be a co-producer, not just for streaming rights, or the Doctor Who programme budget will take a hit.

My experience of BBC production budgets - which is admittedly mostly wildlife programmes, with Andy's Dinosaur Adventures being the only science fiction series - is that the big budget stuff is funded like this:

For wildlife stuff, when the BBC was flush with cash, the ratio of funding was 40% BBC, 35 to 40% BBC Worldwide, 20 to 25% from a single foreign co-producer.
As recessions hit, the amount needed from foreign co-producers went up, but the BBC Natural History Unit made sure they always provided the biggest share of the budget, because they wanted overall editorial control. (Though making different versions for the foreign co-pros was a thing in natural history telly: we got 3 x 50 minute episodes on the Beeb, which was recut into 1 x 90 for Discovery USA).

Drama is more complicated than documentary telly, obviously, but the above is still the basic funding model.

So if the deal with Disney+ means that former co-producers can no longer show Doctor Who in their territories, then the cash will have to come from somewhere else.

#193
Based on series 12 budget, which was £15m, the BBC put up £12m and BBC America £3m. I suspect that Disney are not necessarily co-funding the series like BBC America, but money from the streaming deal will definitely go towards bridging any budgetary requirements.

#194
Great to have your insight on matters Dr Who again Nathan. Always appreciated. What were your thoughts on Power of the Doctor?

#195
Vodkashok said:
Great to have your insight on matters Dr Who again Nathan. Always appreciated. What were your thoughts on Power of the Doctor?
Click to expand...
Apparently, Disney executives do get to see the episodes before they are broadcast in the UK. However, the input appears to be very minimal.

My thoughts on Power of the Doctor? I will post my non-spoiler thoughts:

Wow. Just wow. I needed time to process it all after watching. I think it's best thing Chris Chibnall has written for Doctor Who. Very emotional, very enjoyable, and that regeneration... well words cannot describe it. So many wonderful surprises a long the way. This fan is certainly happy with that send off for Jodie. I think I really need to watch it again.

The Power of the Doctor had a 7-day consolidated audience figure of 5.29 million viewers, an audience share of 27.0%. The episode had an AI score of 82. Currently it was the second most watched programme of the day and the 5th most watched programme that week. It also managed to win its time slot, beating ITV's The Larkins (3.77m). It was the second most watched drama of the week as well, only charting just behind Doc Martin, and it beat every episode of Coronation Street and Emmerdale. To give you some comparison, the top drama for the following week ending the 30th October was SAS Rogue Heroes, the new series from the Peaky Blinders writer Steven Knight, which managed to attract 6.28 million viewers for its first episode. The Saturday evening instalment of Strictly Come Dancing only attracted 4.80 million viewers.
Last edited: Nov 12, 2022

#196
The new companion for Ncuti Gatwa's Doctor will be announced live on Children in Need later today.

#197
Millie Gibson has landed the role of Ruby Sunday, the Doctor's new companion. Starring alongside Ncuti Gatwa, Millie will make her debut over the festive season in 2023 when the Fifteenth Doctor takes control of the TARDIS.

#198
That photo of The Doctor with Ruby Sunday is like a memory of my parents in their youth (sometimes you forget parents had a youthful life too). I may be tempted to return to regular Doctor Who having left after Capaldi's run, and only watched special episodes of tbe last run (the pirates one "Legend of the Sea Devils" was top class).

#199
My favorite Doctor is David Tennant's run (now he acts as villain in movies though). Though my first regular viewings weere classic re-runs of Tom Baker's with his iconic scarf (many cosplayers just adore it too), then a whole empty space for me. I returned to watching regularly with David's run. Did not really keep up with Matt Smith and returned with Peter Capaldi (loved Missy as antagonist).

Staff member
#200
Who is like that, isn't it? It was so much of peoples lives and especially their childhoods.