#1
Hey folks. I have a bunch of the Modiphius Conan wave 2 books on my shelf not getting used (comp copies), so it seems like time to see if anyone would like them.

Let’s say £17 each, including postage to UK mainland (prob pay by Paypal). Mint condition, physical books only. Shout in replies if interested in one or several. 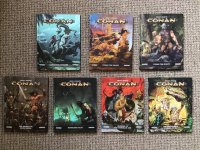 #4
Hey Tim. I'll take Nameless Cults and the Ruins one- sorry, no interest in in Monolith one

#5
GuyMilner said:
Hey Tim. I'll take Nameless Cults and the Ruins one- sorry, no interest in in Monolith one
Click to expand...
Cool! What's a platform where we can message to sort the details?

And yeah, I suspect Monolith won't shift, as it's a very particular thing. (Bridging the Conan rpg with a Conan board game, with scenarios etc.)

#6
GuyMilner said:
Hey Tim. I'll take Nameless Cults and the Ruins one- sorry, no interest in in Monolith one
Click to expand...
Good choice this one, it offers insights into some mythos beings and I use it when I run my own Conan games. Horrors is good too for the beasties.

#7
The Brigand is useful because it details (not extensively) just enough information on the City of Zamboula, first encountered in the re-named original fiction of Robert E. Howard "The man-eaters of Zamboula".

This is where some of the editors at Modiphius Entertainment, showed their poor understanding of Robert E. Howard literature, that hey almost committed a grievous "sensitivity" blunder trough an attempted retconning away of the Darfari cannibal cult in Conan The Adventurer. I had to get that put back in, imagine me, the black one, having to to point out the continuity mess that many of the white editors failed to notice.
You must log in or register to reply here.
Share: Facebook Twitter Google+ Reddit Pinterest Tumblr WhatsApp Email Link
Top