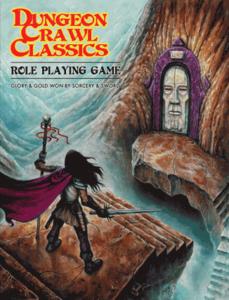 Through Monday, May 10 we present two all-new offers featuring Dungeon Crawl Classics, the Goodman Games FRPG of gold and glory won by sorcery and sword. Start with our Dungeon Crawl Classics Bundle, with the core rulebook and an array of modules that carry your adventurers from zeroes to heroes. The standalone companion offer, DCC Lankhmar, gives you the big boxed set that adapts DCC to Fritz Leiber’s world of Nehwon, home of Fafhrd and the Gray Mouser. After establishing the Dungeon Crawl Classics brand with five dozen old-school D&D 3.x modules published under the d20 license (2005-2011) — we featured these in our April 2016 Dungeon Crawlers offer — Joseph Goodman introduced his own standalone DCC RPG in 2011. Since then the game has steadily gained ground, strengthened by stalwart Goodman designers like Michael Curtis and Harley Stroh as well as TSR-era artists like Erol Otus, Jeff Easley, and Jeff Dee. DCC‘s third-party support is also vigorous; hundreds of small publishers have embraced one of the gaming field’s most supportive licenses. A high-power October 2015 Kickstarter campaign for the corebook’s fourth printing raised US$215K from 2,259 backers.

Not exactly a retro-clone but suffused with old-timey brio, DCC RPG glories in its own loopy and lurid, giddy and gaudy aesthetic. Its inspiration — the most colorful sources in Gary Gygax’s “Appendix N: Inspiration and Education Reading” in the original AD&D Dungeon Masters Guide — shows in DCC RPG module titles like The Sinister Sutures of the Semptress, The Corpse That Love Built, The Accursed Heart of the World Ender, The Croaking Fane, The Dread God Al-Khazadar, and Creep, Skrag, Creep! In all these heady adventures it’s easy to stay focused on DCC RPG‘s goal: “Adventure as 1974 intended you to.” This bargain-priced Dungeon Crawl Classics Bundle presents the comprehensive 506-page DCC rulebook and an array of modules that carry characters from the Starless Sea to the Cannibal Kingdom and beyond the Black Gate. Pay just US$14.95 to get all four titles in this offer’s Starter Collection (retail value $52) as DRM-free .PDF ebooks, including the complete 506-page DCC RPG rulebook, the Gen Con tournament module The Black Heart of Thakulon the Undying, and the popular 0-level “funnel” adventure Sailors on the Starless Sea, as well as the DCC Judge’s Screen. And if you pay more than this offer’s threshold (average) price, which is set at $29.95 to start, you’ll level up and also get this offer’s entire Bonus Collection with six complete modules (for character levels 1-6) worth an additional $42, including The Queen of Elfland’s Son, Moon-Slaves of the Cannibal Kingdom, The Star Wound of Abaddon, Emirikol Was Framed!, Beyond the Black Gate, and Imprisoned in the God-Skull. 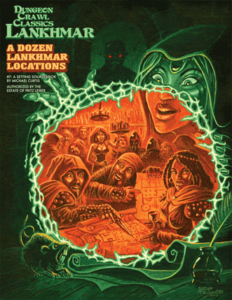 Fritz Leiber (1910-1992) chronicled the adventures of Fafhrd and the Gray Mouser for more than fifty years. From their home base in the City of Seven-Score Thousand Smokes, Lankhmar, the two rogues gallivant across their fantastic realm of Nehwon. Fafhrd, a tall and brawny northern barbarian, is a warlock in service to the wizard Ningauble of the Seven Eyes. The small and nimble Mouser, a mercurial thief, was once apprenticed to Sheelba of the Eyeless Face. Through three dozen picaresque stories that range widely in tone, the two peerless swordsmen perfectly model the typical D&D player character. No wonder one of TSR’s first products was Leiber’s Lankhmar board game, and AD&D 2E had a well-regarded line of Lankhmar – City of Adventure supplements.

Authorized by the Leiber estate, Goodman Games funded the Dungeon Crawl Classics Lankhmar line in a March 2017 Kickstarter campaign (1,838 backers, US$187K). The 2018 boxed set expands the DCC RPG rules to match the tone of Leiber’s most exciting stories. A new “Fleeting Luck” mechanic lets good fortune blesses your characters one minute, only to dash their hopes the next. Goodman has followed up with a typically strong support line of a dozen Lankhmar modules, as well as several interesting blog posts about Fritz Leiber and his work. This DCC Lankhmar Bundle lets you explore the City of the Black Toga and follow in the footsteps of Fafhrd and the Mouser across Nehwon. Pay just $14.95 to get both titles in this offer’s Starter Collection (retail value $52): the massive Dungeon Crawl Classics Lankhmar boxed set (plus the free DCC Quick Start Rules) and the introductory adventure Gang Lords of Lankhmar. Pay more than this offer’s threshold ($24.95 to start) and you’ll also get this offer’s entire Bonus Collection with no less than eight supplements and modules worth an additional $56, including The Land of Eight Cities, A Dozen Lankhmar Locations, The Fence’s Fortuitous Folly, Acting Up in Lankhmar, Grave Matters, Rats of Ilthmar, Violence for Votishal, and Blasphemy and Larceny in Lankhmar.

Ten percent of each payment for these two Dungeon Crawl Classics offers (after gateway fees) goes to the charity chosen by DCC RPG designer Joseph Goodman, San Francisco-Marin Food Bank. For more than 30 years the SF-Marin Food Bank has worked to end hunger in the San Francisco Bay Area, where one in four neighbors is at risk of hunger.

These two Dungeon Crawl Classics offers vanish together into the lowest levels of the labyrinth Monday, May 10. Before then — let’s get crawling!

Staff member
#2
Any opinions on the DCC Lankhmar material? How portable is it to other D&D takes?

#3
I backed it in a big way as I'm a huge Lankhmar fan and like DCC. As DCC is OSR under the hood you should be able to port it to any of the OSR alternatives,

Staff member
#4
Thanks - I love that kind of setting so the collection looks interesting to me.

Staff member
#5
nclarke said:
I backed it in a big way as I'm a huge Lankhmar fan and like DCC. As DCC is OSR under the hood you should be able to port it to any of the OSR alternatives,
Click to expand...
Is DCC well supported on VTT @nclarke ? I ask since that would make the need for non platonic dice disappear..

#6
DCC is well supported - officially- on Foundry and the system author is currently working with a feature-rich die roller module (Dice-So-Nice) to get the various weird die shapes added to that tool.
You must log in or register to reply here.
Share: Facebook Twitter Google+ Reddit Pinterest Tumblr WhatsApp Email Link
Top