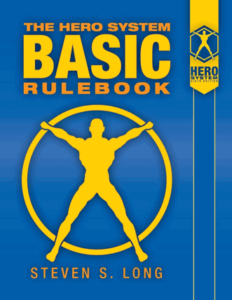 Through Monday, March 15 we present two giant offers featuring the 2009 Sixth Edition of the HERO System from Hero Games. The matchless flexibility of the HERO System lets you create any character, super power, spell, equipment, vehicle, or headquarters you can imagine, and the 6E version is the most detailed and comprehensive ever. The HERO System 6E Bundle has all the universal rulebooks and sourcebooks for every kind of campaign — over 4,300 pages of material. And its superheroic companion, Champions 6E, has the 6E Champions campaign sourcebook (plus the standalone Champions Complete rulebook), the 6E version of Champions Universe, Powers, Beyond, Book of the Empress, and all three Villains books. In both page count and discount off retail price, these two offers represent some of the best values we’ve ever presented.

Across five editions from 1980 to 2009, Champions and the HERO System maintained remarkable consistency. A character built in the 1981 First Edition, though underpowered by the standards of Fifth Revised Edition (2002), can nonetheless wade into a FRED battle basically unchanged. But Hero Games line developer Steven S. Long, the prolific mainstay of the line, saw opportunities to fix a few minor issues that had bothered him and others. On the Hero forums in 2008 he solicited discussion and feedback in a topic that eventually accumulated several thousand posts. Steve read them all, discussed them a lot, and eventually synthesized a truly gigantic two-volume, 788-page rules set that did, indeed, fix those minor issues. Sixth is the first version that makes breaking changes to backward compatibility, though these revisions make barely a ripple compared to, say, D&D 3.x > 4E > 5E. Most heroes designed for previous editions still work fine in 6E, though if you care about accurate point totals, a conversion requires significant tuning. [Jargon alert: For those familiar with HERO, Sixth Edition drops the venerable cost breaks for Figured Characteristics, and compensates by upping a character’s starting point totals. Some skill prices have changed, a few powers (especially Adjustments) are reworked and repriced, and Elemental Controls have given way to “Unified Power.” The most significant design revision is a slight nerfing of Killing Attacks: The Stun Multiple is reduced, and non-resistant defenses work against KAs by default. On the other hand, Armor Piercing is now a +1/4 advantage — cheap!]

For a few years after its debut, 6E amplified in the HERO community the previously negligible annoyance of edition wars. Much of this tension arose because 6E requires a technical shift in thinking about character conceptions and point costs. Now players tend to view its changes as logical and sensible, if sometimes over-detailed. (When a HERO fan calls rules “over-detailed,” you may justly raise an eyebrow.) Sixth Edition, like every HERO edition, has its particular adherents — but 6E has earned wider respect as one more evolution of a landmark system that, across 40 years, still draws devoted fans.

Pay just US$24.95 to get all seven titles in this HERO System 6E offer’s Player Collection (retail value $130) as DRM-free .PDF ebooks, including the complete two-volume 6E rulebook (V1 Character Creation and V2 Combat and Adventuring), as well as the HERO System Basic Rulebook that, at 138 pages, provides a concise introduction. The Player Collection also includes both the Advanced Player’s Guide and Player’s Guide II rules expansions; and the 6E Equipment Guide and Skills (both previously presented in our November 2013 HERO System Bundle). 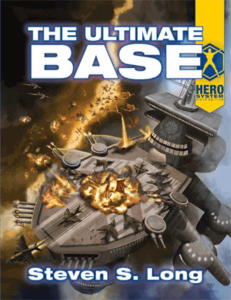 And if you pay more than this offer’s threshold (average) price, which is set at $39.95 to start, you’ll also get this offer’s entire Game Master Collection with six more titles worth an additional $128, including the Sixth Edition versions of Star Hero and Fantasy Hero (both previously in the November 2013 Hero offer); the Grimoire, Martial Arts, and the 6E Bestiary; and your guide to building every size headquarters from a walk-in closest to a kingdom, The Ultimate Base. (All eight previous books in Hero’s Ultimate series were for Fifth Edition, and included in our January 2016 Ultimate Champions offer. The 6E equivalents of those eight books are the two Advanced Player’s Guide sourcebooks in this offer’s Player Collection.) The HERO System sprang from Champions, and The Super Roleplaying Game has always been its flagship. The Sixth Edition Champions line updates decades of published supplements and sourcebooks, and adds new material adapted from the Champions Online MMO. This Champions 6E Bundle gives you more than two thousand pages of 6E material for an unprecedented bargain price.

Pay just $24.95 to get all six titles in this offer’s Campaign Collection (retail value $105), including the standalone Champions Complete rulebook (previously in our November 2013 offer); the Champions 6E campaign sourcebook, one of the last game supplements with work by the late Aaron Allston; the 6E Champions Universe setting book; Powers, an update of the Fifth Edition UNTIL Superpowers Database supplements; the Galaxy-spanning Champions Beyond; and the recent collection of pregenerated superhero characters, Book of Templates. Pay more than this offer’s threshold ($39.95 to start) and you’ll also get this offer’s entire Villain Collection with four evil treatises worth an additional $93.50, including all three Villains compilations — V1 Master Villains, V2 Team Villains, and V3 Solo Villains — as well as The Book of the Empress (about Istvatha V’han, the Empress of a Billion Dimensions), plus The Booklet of the Empress, a collection of characters provided as a bonus to backers of the December 2011 Kickstarter campaign.

Ten percent of each payment (after gateway fees) goes to these two HERO offers’ pandemic-related charity, Direct Relief. Direct Relief gets protective gear and critical care medications to health workers, with emergency deliveries to medical facilities across the US and to regional response agencies across the world.