Boardgames - What have you played recently?

#201
Our family friend Len was a member of the Long Range Desert Group and was later seconded to The SAS. He knew many of the famous characters now portrayed in Rogue Heroes.

Staff member
#202
I see Osprey have a sale on

#204
Yesterday we played a game of Medioevo Universale - a historical 4X style game. I came a poor third but the game was won by 1 ‘honour point’ so overall it was very close and came down to the last round.

A good game even though I was soundly thrashed 😊

Some pics from a previous game - 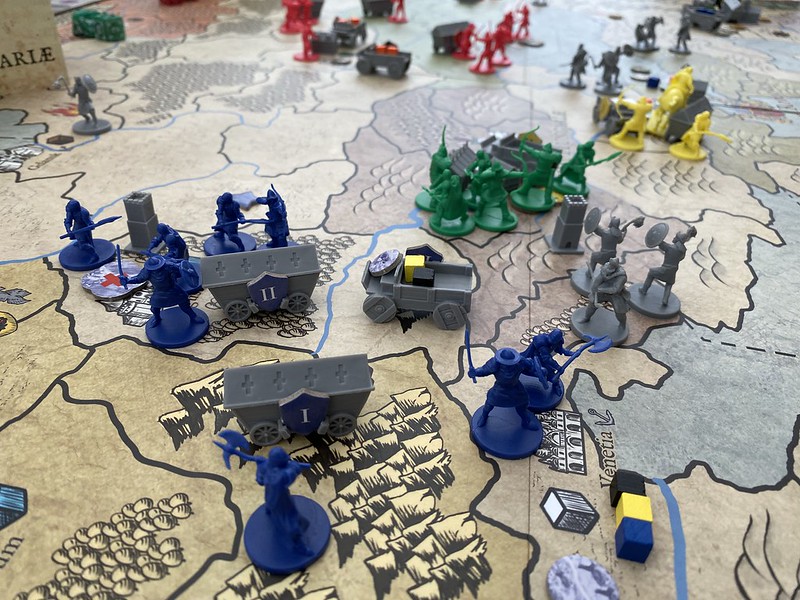 #205
Not got much boardgaming in over Christmas, but managed to squeeze in a game of Coup and Coup: Reformation the other night, which I got for Christmas. Enjoyed introducing the wider family to Werewolves of Millers Hollow on Christmas Day, which they quickly grasped thanks to the Traitors TV show.

#206
I got in a game of Thebes with the family yesterday. I'd not touched it since pre-pandemic so ended up getting some of the rules wrong, meaning we cleaned out the dig sites a bit more thoroughly than normal, but it remained a good time. We might give it another shot with the real rules today.

Games with the family can be a bit unpredictable, meaning we normally end up going back to Trivial Pursuit, but this one seems to have been a hit with everyone.

Staff member
#207
My youngster brought Guilds of Cadwallon to the New Year Party we went to and all of a sudden a five player game on the bigger board was underway and they seemed to love it. Inspired idea of his and it made all the adults go ‘ahhh, isn’t it nice’. 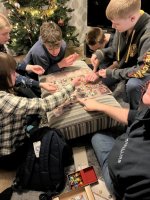 #208
Played Ticket to Ride with the family on New Year's Eve. Reminded me again what a classic and solid game it is. Should play more often. Went for an outrageously long and convoluted route based on my initial route cards, and for once managed to pull it off...

#209
Played Xia Legends of a Drift System yesterday to teach Jenny and Lisa the rules in preparation for a longer Game next week. Will post a write-up and some piccies when able. It's a brilliant 4X sandbox space Game, you win by scoring VP but there are nine different ways you can do this (e.g. trade, explore, be a pirate, be a bounty hunter, dig alien ruins etc.) The artwork is fantastic and there are ship models, comets, an easy to work supply and demand economy etc. Oh, and nice shiny triangular metal coins as currency.
I undertook a Mission to assassinate Lisa (when you are destroyed you lose some stuff but then respawn on the board next turn.) I did some trading to get some credits and then equipped my ship with a blaster, at which point everyone else started running scared. I managed the mission only to find that the planet where I had to complete the mission hadn't been discovered yet! (maybe I should have read the card a bit better.)
Meanwhile Jenny "I really don't know what I'm doing" had quietly got the last VP to win the Game.
D

#210
Not played much in the past few weeks, but in the spirit of Christmas/New Year masochism I have been reading the rules for High Frontier 4, Pax Renaissance 2 and Planet Apocalypse - not all at the same time though...

#211
Over Christmas, I brought out a few old games I've not played in a long time.

First was El Grande, which I haven't played in maybe 15 years. We played it three times, and it was more fun and played quicker than I remember. I played this with my nephews - I haven't been able to excite Mrs or Miss H in El Grande, unfortunately.

Finally, I played two games of my favourite game of all time: Cosmic Encounter. I first played this back in school (so I first got it in the early 80s), although we didn't play that edition - I have the current FFG edition. I played this with Miss H and my nephew - a three-player game isn't Cosmic Encounter at its best, but it plays quickly with three and we got two games in. (Alas, Mrs H has no interest in Cosmic Encounter, so it rarely gets to the table.)

#212
Cosmic Encounter "I doubt that you will win"

#213
Brass Jester said:
Cosmic Encounter "I doubt that you will win"
Click to expand...
Indeed.

As it happens, Miss H was dealt Skeptic as one of her initial three aliens, but was a bit confused by it so picked something else instead (I can't remember which).

#214
We played a civ-building game called Mosaic. Huge game in a huge box. Play time was about 4-5 hours for a 6 person play, which was not bad. Your civ can produce stone, food, or ideas and you use these to research techs, build cities and towns, or special projects and wonders. There’s a certain amount of ‘control of board influence’, but it’s not a game of direct military conflict, and you don’t remove other players builds from the board, typically. Play is a bit like Civ the computer game meets 7 Wonders. 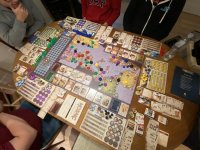 #215
Guvnor said:
Very clever game, very rewarding, loads of scenarios, feels reminiscent of Squad Leader in learning but models command and control and fog of war far more ingeniously. Probably going to be a 8/10 or even 9/10 game for me.
Click to expand...
I was wondering if it's a bit closer to Up Front, in terms of scale anyway. Always liked the idea of that but not the trademark Avalon Hill complexity. Something in the same vein but more user friendly would probably be right up my street.

Staff member
#216
steveh said:
Next we played Carcassonne, without any of the expansions. I've played this online a fair bit, and I've played my set a few times, but I haven't played it without any expansions for ages. It was really nice to play "pure Carcassonne" again - I must strip out the expansions from my set (if I can work out which tiles they are).
Click to expand...
I play It with nothing but the " River"

Staff member
#217
ltd said:
I was wondering if it's a bit closer to Up Front, in terms of scale anyway. Always liked the idea of that but not the trademark Avalon Hill complexity. Something in the same vein but more user friendly would probably be right up my street.
Click to expand...
I am afraiI don't know. However it's about 5-6 per side so not even platoon level.

#218
We're gradually working our way through this year's Exit Advent Calendar. Thanks to the postal strikes, it arrived late, and so we're doing a couple of days worth of puzzles every now and then. These are of variable quality, some really satisfying, others not so, but overall having a fun time.

Staff member
#219
The very enjoyable "The Captain is Dead" which is a delightful collaboration game. It's themed like a superhero Trek game, the captain is dead and if you don't get the jump drive going then the aliens are gonna destroy you.
It's similar in mechanics to Pandemic but feels to have many more threats, all quite understandable. It played in 2.5 hours with three players on a first run thru.
Very enjoyable, great fun. 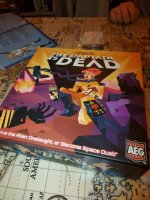 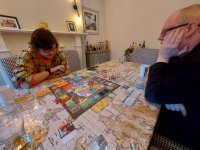 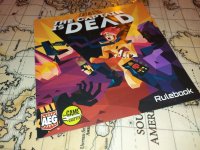 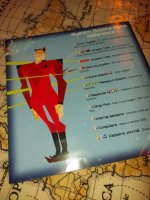 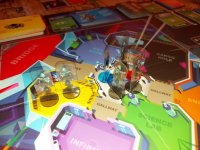 #220
Not enough of our regular number for our Blades in the Dark session on Friday, and so we switched to boardgames instead. Played Marvel Champions and Role Hospital. I enjoyed both, although Champions took longer than it should have done (first game for the group), which I think put off the others, and so I suspect it might not get another play with them. Nevertheless, we defeated the bad guy, and our hospitals didn't see a single mortality (I came close to winning, but made one mistake and couldn't remember how I'd played a turn and so couldn't rewind it to put it right - serves me right for not concentrating!)
You must log in or register to reply here.
Share: Facebook Twitter Google+ Reddit Pinterest Tumblr WhatsApp Email Link
Top